The Toronto Artillery Foundation (TAF) is a registered charity that was founded in 1978 under the patronage of Pauline M. McGibbon, the Lieutenant-Governor of the Province of Ontario at that time. Of note her husband Lt. Donald McGibbon was a retired gunner officer. 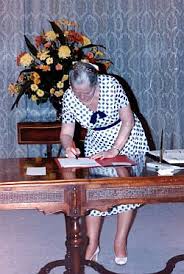 The main objects for which the charity was incorporated was to receive and maintain property and funds for the benefit and welfare of the 7th Toronto Regiment and the members thereof.

1. Equipping and maintaining the band(s) of the Regiment;

2. Establishing and maintaining a Regimental Museum;

3. Holding property for the use of the Regiment, including the 25 Pounders, our colours; and

Your donation to the TAF helps ensure the continued success and well-being of the men and women serving in the 7th Toronto Regiment.  Your gift will also be eligible for a charitable tax deduction.

If you’re ready to give and be part of the Regimental Family, click DONATE NOW.

When the Foundation was created in 1978 there were a total of twenty-nine (29) individuals and groups which made up the Founding Members.

Amongst the Founding Members were some notable Torontonians:

Of the original 29, seven are still with us today:

There are four classes of Membership in the Foundation:

Benefactors are those Donors who have made permanent gifts to the Foundation aggregating $5,000.00 or more.

Permanent Members are defined as those Donors who have made permanent gifts to the Foundation aggregating $1,000.00 or more.

Subscribers are defined as those Donors who have made permanent gifts to the Foundation aggregating less than $1,000.00.

Only Benefactors and Permanent Members are voting Members and are entitled to notice of meetings of the Members, including the Annual General Meeting.

Voting Members elect six Trustees to serve on the Board of the Foundation alongside the specified ex-officio Members, appointed by virtue of their position within the 7th Toronto Regiment.

Anyone can become a Permanent Member of the Foundation by aggregating a total  of $1,000.00 either by donating cash or a donation in-kind.  All  donations, no matter what the size, receive an official charitable tax receipt.

Members In Memoriam are defined as “Those individuals for whom permanent gifts  are subscribed in a sufficient amount in memory of them after their  deaths shall be considered to be Benefactors or Permanent Members in  memoriam.

The current value of the investments under management is $250,000 +/- which generates approximately $10,000.00 in income annually. The residue of this amount after Foundation overhead and expenses is transferred into the Regimental Foundation Income Fund for the welfare and support of the Regiment at the sole discretion of the Commanding Officer.

The Committee is made up of three members of the Foundation who are appointed at the annual Board of Trustees meeting after the Annual General Meeting.

The current Committee consists of the following:

The Foundation HGC was established as a Committee in 1992 to oversee the acquisition, restoration and operation of historic artillery equipment especially as it relates to equipment used by the Regiment and its senior battery (9 Bty).

On behalf of the Foundation its first acquisition was our 25 Pounder Suite (Quad, Ammunition Trailer (Limber) & 25 Pounder Gun/Howitzer) which was successfully restored in time for the Change of RSM Parade (John Mahon to Kevin Lightfoot) on 4 Jun 94 with its first public appearance on 5 Jun 94 parading with the Regiment, as its colours, in the parade commemorating the Fiftieth Anniversary of D-Day.

Much credit for the restoration phase goes to the Restoration Co-ordinator WO Roy Munro of the old Toronto Artillery Ex-Sergeants Association. Roy was on hand for the turnover in 1994 but sadly he past away two years later not having seen the full extent of how the 25 Pounder has been integrated into and served the Regiment including the participation with the Regiment at various Queen’s Park Salutes.

With the completion of the 25 Pounder Suite and the turnover of the equipment to the Limber Gunners for safekeeping, care, maintenance and display the Historic Gun Committee took a well deserved extended leave for about the next ten (10) years.

The Committee was brought back from leave in 2008 to co-ordinate the acquisition and restoration of our second major piece of equipment, the “Irish” 25 Pounder, which arrived in late 2010.

With that done, the Committee is in the throws of putting together another fund raising campaign around the “Irish” gun to recoup the monies spent by the Foundation on its acquisition, transport and restoration over the last three (3) years just as it had done for the original 25 Pounder Suite from 1993 – 1995.

Our equipment is currently on loan to the Regiment and is operated by the Limber Gunners.

The current Committee is composed of:

This year it was decided to establish the Executive Committee to better manage the Foundation in situations which may require a rapid response and decisions when the Board of Trustees may not be immediately available to do so. The Committee is made up of the Chairman, Vice Chairman, Secretary and Treasurer of the Foundation.

A Fund Raising Committee has been established under the leadership of the former HLCol, Tom Bitove and the current HCol, Ernie Beno. Included on the committee are Mark Clearihue, David Burnett, Barry Downs, Jeannette Chau, Tony Keenan, Paul Kernohan and Ken Wright. Of course its mandate will be to raise funding for both long term investments under the control of the Investment Committee and short term initiatives to benefit the Regiment directly for special projects. More information on specific fundraising opportunities and events will be forthcoming in the near future.

A Communications Committee has been established to better co-ordinate our message and get it out well beyond the current local Gunner Family. This will be done in conjunction with the Fund Raising Committee. The committee consists of Tony Keenan, Jeannette Chau and Paul Thompson.

If you would like to make a donation to the Toronto Artillery Foundation, you may do so in one of two ways:

1. By cheque payable to the Toronto Artillery Foundation, at: