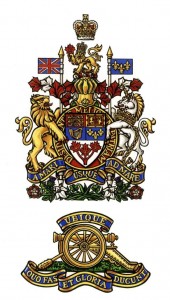 There has been a formed artillery presence in Toronto since 1793 when the first construction of Fort York was completed.  Initially, with the British Army providing the main defence for Canada, the guns at Fort York were manned by members of the Royal Artillery.

THE WAR OF 1812:  The first “Canadian” gunners in Toronto appeared in 1813 when Alexander Cameron formed his Volunteer Incorporated Artillery Company.   The all-volunteer company, raised under the jurisdiction of the Upper Canada Legislature, was manned by able-bodied men between the ages of 16 and 45 who enlisted to serve on a full-time basis for the duration of the war.  The company was on active service from April 6, 1813 until March 24, 1814.  Soon after the war ended, steps were taken to reduce the Incorporated Militia and responsibility for the defence of Canada fell back to the British garrisons.  Following the War of 1812; several of the Incorporated Regiments of Infantry had an artillery company.  In 1827 Captain James G. Chewett commanded the 1st West York Artillery Company.  In 1832, Thomas Carfrae Jr was serving as Captain of the 1st East York Artillery Company.

On December 7, 1837, Mackenzie’s rebel force of about 1,000 men was gathered at Montgomery’s Tavern on Yonge Street in Toronto (about ½ mile north of Eglinton Ave).  The 1st Toronto Artillery Company under the command of Major Carfrae “placed their two guns on the western side of Yonge Street, and opened fire in a north-westerly direction upon the rebels in the belt of woods. …  The cannon were then moved some distance farther up the road. Their muzzles were directed due northward, and two round shot were sent through the body of the tavern.  Immediately there was a stampede from inside, the insurgents pouring out like bees from a hive, and “flying in all directions into the deep, welcome recesses of the forest.”[i] 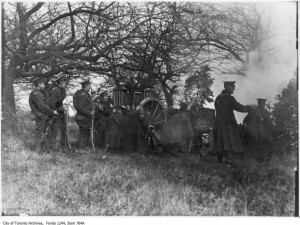 The Militia Act of 1855 (July 1) introduced a voluntary “active militia” of 5,000 paid men which included seven field batteries, but Toronto was not included.  On August 14, 1855 Lieutenant Colonel George Taylor Denison II, commanding the York Light Dragoons, wrote to the Adjutant General recommending the formation of a 6-pounder field battery in Toronto.  In 1856 the Militia Act was amended to allow for the raising of unpaid units and on February 7, 1856 the “Volunteer Militia Field Battery of the County of York” was authorized under the command of Captain Robert Brittain Denison; thus the beginning of a continuous militia artillery presence in Toronto.  The battery was subsequently named the Field Battery of Artillery of Toronto and later the Toronto Field Battery retaining the later name until March 9th 1866. 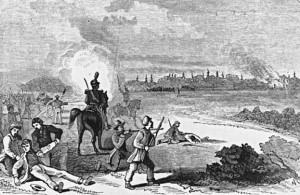 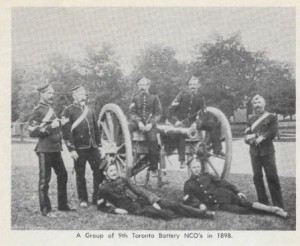 The Volunteer Militia Foot Artillery Company of Toronto was authorized on November 13, 1856.  On April 26, 1860 the company was converted to infantry and became No 5 Company, Second Battalion Volunteer Militia Rifles of Canada (later the Queen’s Own Rifles).

The Fenian plans to invade Canada (1866 – 1871) included the taking of Toronto and the seizure of the Grand Trunk Railway that connected Sarnia in the west to Rivière du Loup in the east. These plans had three significant impacts on the artillery in Toronto:

First, to provide defence for Toronto, the “Battery of Garrison Artillery” was formed on October 5, 1866 under the command of Captain T.A. McLean;

Second, the Grand Trunk Railway Brigade was formed, it included the 4th Battalion, Garrison Artillery (also referred to as 2nd Brigade Artillery) headquartered in Toronto under the command of Lieutenant Colonel Spicer.  The battalion had four companies in Toronto and two companies at Stratford.  The brigade was disbanded on June 17, 1881; and

Third, on July 7, 1866 the Toronto Field Battery is re-established under the command of Captain William Patterson.  At this time, the battery was equipped with three Smooth Bore Muzzle Loading (SBML) 9-pounder guns and one 24-pounder Howitzer.

The Northwest Rebellion (1885).  Toronto gunners were not directly involved in the actions in Saskatchewan however, “the Militia department placed the following corps under arms, in their several localities, as a reserve, to be held in readiness in case of need:  Toronto Battery of Garrison Artillery, under Capt. W.B. McMurrich; Toronto Field Battery, under Major John Gray:…”[i]

The South African (Boer) War:  Three 9th Battery Officers and nine gunners identified on the rolls as being from 9th Battery served in South Africa.  .  The majority of Toronto’s militia gunners were enrolled in “C” Battery.  Captain Lewis Erskine Wentworth Irving, a 9th Battery officer, reverted to Lieutenant and was placed in command of No 3 Section.  Captain Ewan MacDougall served with the Kimberly Horse.  During the First World War, MacDougall would command 9th Battery and Irving the 15th Battery. 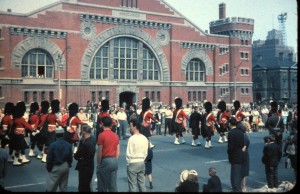 First World War.  For legal reasons, the batteries of the pre-war Non-Permanent Active Militia were not “mobilized”; rather batteries were numbered sequentially as they were organized and raised.  During the Great War, Toronto raised, or significantly contributed to15 batteries of Field Artillery as follows:

67th Battery, (March 1916) recruited amongst students at the University of Toronto and unofficially referred to as “U of T” Battery;

(67th, 69th and 70th were draft giving depot batteries that were absorbed by No.2 Artillery Depot (Military District 2) in October 1918).

In addition, from September – October 1915, 9th Battery recruited 125 men for service with the Royal Canadian Garrison Artillery (RCGA) in Halifax. 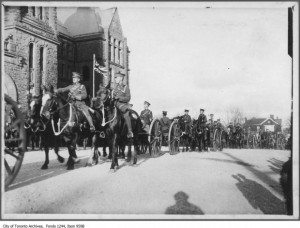 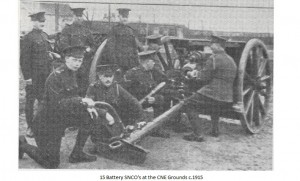 During the First World War, the artillery truly lived up to their single battle honour “Ubique” –Latin for “Everywhere” – they took part in all the major battles in which Canadians were involved:—Ypres, the Somme, Passchendaele, Amiens, Arras, Cambrai, Mons and Vimy Ridge.

As a result of the Otter Committee report, on February 2nd, 1920, the pre-war artillery was re-organized to perpetuate those batteries that had served in the war.  In Toronto, the 3rd Brigade, Canadian Field Artillery was formed; to the 3rd Brigade the 9th, 15th, 30th and 53rd Batteries were allocated.  All but three of Canada’s pre-war field batteries were given new designations.  These “exceptions were the 2nd (Ottawa) Battery, the 9th Battery of Toronto and the 16th (How.) Battery from Guelph – each of which had fought in France under its old militia number, and now retained this with understandable pride.”[ii]

Attached to Toronto’s 3rd Brigade was the 1st Siege Battery; subsequently re-designated as 21st Medium Battery.  March 15th, 1931 brought another major organizational change for Toronto’s artillery units; the 4th Medium Brigade consisting of 21st and 23rd Medium Batteries was formed, with the 24th and 25th Medium Batteries being authorized but not immediately organized.  On the same date, the 3rd and 4th Brigades were grouped under the newly formed 7th (Toronto) Regiment, Royal Canadian Artillery.

Second World War:  During the Second World War, six of the 7th (Toronto) Regiment’s batteries were mobilized for active service overseas.  On September 1st, 1939, the 9th Battery under command of Major Ken Lander and 15th Battery under Major (later Major-General) A. Bruce Matthews were mobilized for 3rd Army Field Brigade.  Shortly after its arrival in England, in February 1940 the Brigade was re-designated as 11th Army Field Regiment.  As a result of a major reorganization of the Artillery structures, the two Toronto batteries were merged as the 9/15th Battery.  In August 1941, as the result of a further reorganization, the 7th Anti-Tank Regiment was formed and 15th battery was converted and assigned to it; 9th Battery remaining with 11th Army Field Regiment.  23rd Medium Battery was initially mobilized as part of the 1st Medium Regiment and was later transferred to 5th Medium Regiment.  25th Medium Battery was initially mobilized as field artillery and allocated to the 18th Field Regiment; it was later reorganized and transferred to the 2nd Medium Regiment.  30th Battery mobilized as a Light Anti-Aircraft Battery under the Command of Major Conn Smythe.  The 30th Battery was unofficially known as the “Sportsman’s Battery”.  Following a period of coastal defence in British Columbia, the battery joined 6th Light Anti-Aircraft Regiment and deployed overseas.  53rd Battery was mobilized as part of 4th Field Regiment but was later converted to Anti-Aircraft and served with both the 3rd and 11th Light Anti-Aircraft Regiments.  Four of the Toronto batteries were part of the “D-Day Dodgers” serving in the Italian Campaign and later in Northwest Europe 9th, 23rd and 25th Batteries as part of First Canadian Army Group Royal Artillery (1 AGRA) and 15th Battery  with I Corp Artillery. 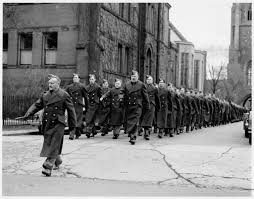 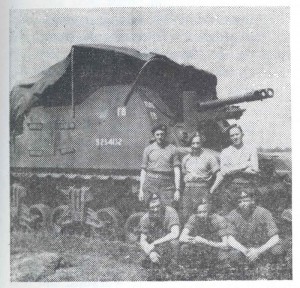 A Sexton Self-Propelled gun of 31 Battery in Holland c. 1945

While its mobilized batteries were serving overseas, the 7th (Toronto) Regiment continued to function as a home based reserve unit, and retained its peace time battery designations, including those which had been used for active service batteries.  As a reserve unit it fulfilled the essential role of training men for active duty overseas.  The 9th, 15th and 53rd Field Batteries and 23rd Medium Batteries were mobilized for home duty on September 1st, 1939.  These batteries were joined by 24th Medium Battery in July, 1940; the 25th Medium and 30th Field in 1941, the latter as a Light Anti-Aircraft Battery and the former as a Field Battery; and the 21st Medium Battery in 1942.

1942 saw the organization of the 32nd Brigade Group and its support artillery regiment the 32nd Field Regiment.  The 9/15th, 21/23rd Field Batteries together with the 24th Medium, re-designated as 208th Field Battery joined the new regiment.  The 25th Battery, re-designated as 207th Battery, together with the 30th and 53rd Batteries became the 42nd Field Regiment.  These two regiments formed the 7th (Reserve) Artillery Group.  The following year the 42nd Field Regiment was converted to an Anti-Aircraft Regiment with the 207th Battery resuming its original designation – the 25th.  In addition to its important role as a training organization, the Group provided the Headquarters personnel for the 3rd Anti-Tank Regiment and provided the nucleus for another Light Anti-Aircraft and two Field Batteries.

Following the war, the Toronto gunners underwent a number of reorganizations; on April 1st, 1946, the Group was re-designated as Headquarters RCA Second Division (later Second Armoured Division) and had under command: the 29th Field Regiment (formerly 3rd Field Brigade) with the 9th, 15th and a newly formed 130th Battery; the 32nd Field Regiment with 121st, 134th and 208th Batteries;.42nd Medium Regiment with 123rd and 125th Batteries; the 49th Heavy Anti-Aircraft Regiment with 30th and 153rd Batteries; and the 69th Survey Regiment with four Batteries (the following year re-designated as 69th Observation Regiment).  In 1950, the 1st Anti-Aircraft Gun Operations Room was added to the Toronto Gunner Family.

While the batteries or regiment have not deployed en masse since 1965 individual augmentees have supported many United Nations and NATO mission around the world.  Several times gunners have been employed in an aid to civil power during weather disasters or when the local security environment required it.  Gunners from the Regiment augmented the deployed field batteries of 1RCHA, 2RCHA and 5RALC during the War in Afghanistan 2002-2010.

In 2016, 9 Battery celebrated it’s 150th Anniversary.  The Battery, along with all of the Regiment paraded along Queen Street to Old City Hall where it reaffirmed its Freedom of the City of Toronto.

[i] Graeme Mercer Adam, The Canadian North-West: Its History and Its Troubles from the Early Days of the Fur-trade to the Era of the Railway and the Settler -1 January 1885, Footnote p 368

[1] John Charles Dent, The Story of the Upper Canadian Rebellion. Volume II  1885 [1] Graeme Mercer Adam, The Canadian North-West: Its History and Its Troubles from the Early Days of the Fur-trade to the Era of the Railway and the Settler -1 January 1885, Footnote p 368 [1] G.W.L. Nicholson, Colonel; The Gunners of Canada Volume 2, footnote p5.
Back to Top