Our Traditions, Customs and Heritage

From quirky Regimental sayings to Royal decrees to Patroness’, read below to begin to find out what makes Gunners different from other soldiers. 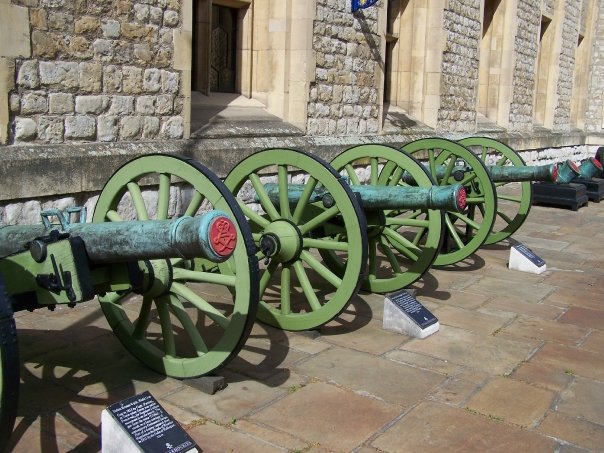 The 7th Toronto Regiment, RCA acknowledges 26 May 1716 as its legendary founding.

That said, the 7th Toronto Regiment, RCA is a Regiment, within a Regiment within a Corps within a Branch, within the British Commonwealth tradition.  Artillery Day, 26 May, is observed annually through the Commonwealth as the Regiment’s Birthday.   The 7th Toronto Regiment, RCA has appeared, disappeared, moved and transferred various times beginning in the 1930’s (please refer to Regimental History) but Gunners are treated as Gunners wherever we may go in the Commonwealth.  The traditions, heritage and practices would be instantly recognized if one were in Toronto, Victoria, Quebec City, Salisbury Plain, Bermuda, Gibraltar, Malta, Australia or New Zealand.

Other founding dates are observed as:

7th Field Regiment, RCA – 1 April 1942 in Sarnia eventually becoming 7th Toronto Regiment, RCA on 1 January 1981.  Be it noted that this is the only Artillery Regiment that carries the name of the city it is established in.

**photo above is from the Tower Armoury, London.  The location of the founding of the regiment is accepted as the Royal Arsenal, Woolwich. 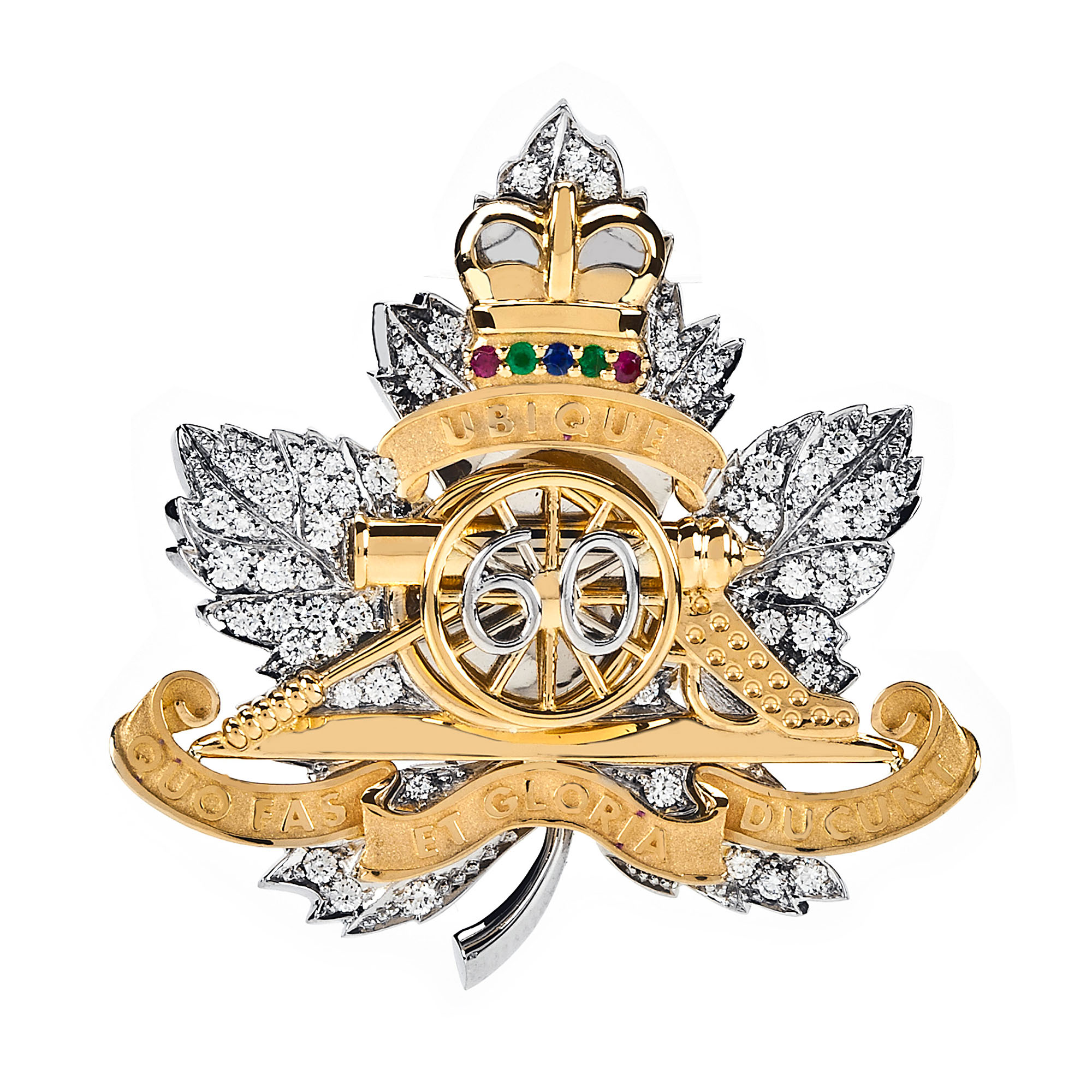 Her Majesty Queen Elizabeth, Queen of Canada is the first and so far only Captain-General of 7th Toronto Regiment, RCA.

Her successor will be our second Captain-General, meaning the reigning monarch is the holder of this title over not only in the 7th Toronto Regiment but all Commonwealth Artillery Regiments.  Similar to how the Governor-General of Canada represents Her Majesty in Canada, the Colonel-Commandant forms the channel of communication with the Captain-General in Canada.  The Royal title of Captain-General is similar to other Regiment’s Colonel-in-Chief.

** photo above is of the brooch given to the Captain-General by the Regiment on the occasion of Her Diamond Jubilee. 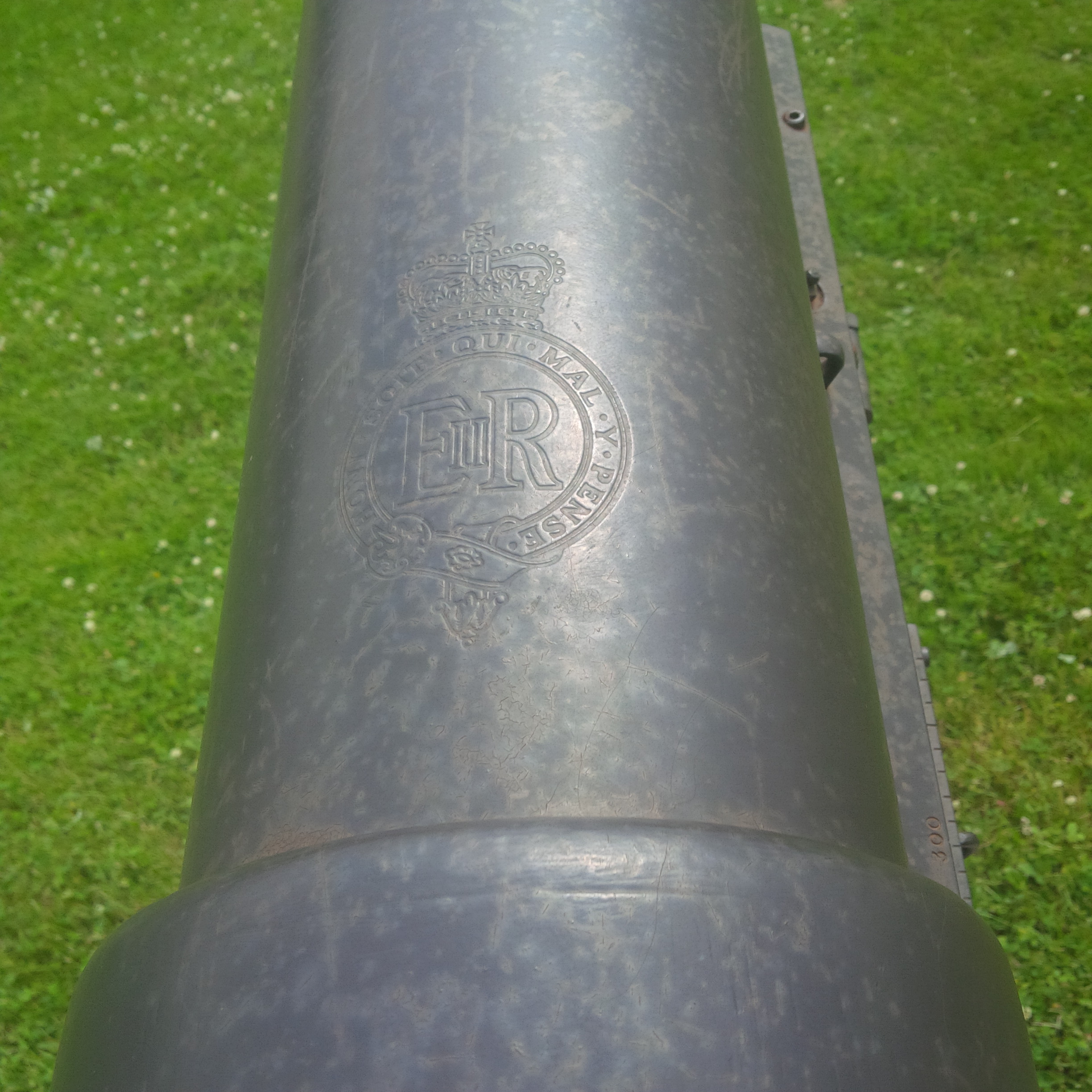 The Guns are our Colours.

Infantry and Cavalry Regiments maintain consecrated ceremonial battle flags that were traditionally carried into battle; they were a rallying point as well as the physical and spiritual essence of a Regiment.  After a successful battle or campaign, the Regiment would emblazon the name of the battle on these flags which are commonly known as Colours.  The 7th Toronto Regiment carries no Battle Flags, as has been the tradition and rule of Commonwealth Artillery Regiments for centuries.  Apart from not emblazoning names of battles won on physical cannons, The Guns are to be treated the same as the flags; they are the rallying point, the pride and often the saviour of many gunners.  Thus, HM King William IV decreed that The Guns will be treated and honoured with the same respect as Colours and will always carry the Monarch’s cypher.  While not consecrated, Our Colours are more present in every soldier’s life than dusty and delicate flags that are paraded on occasion, we continually work, train, repair and care for them.  They are our primary weapon system at the time of war.  Losing a Gun to the enemy is akin to a Regiment surrendering to a foe; to this day no Canadian gun has been lost to the enemy.

**above is a photo of HM Queen Elizabeth’s Cypher on the barrel of a retired 155mm howitzer in Gagetown, NB. 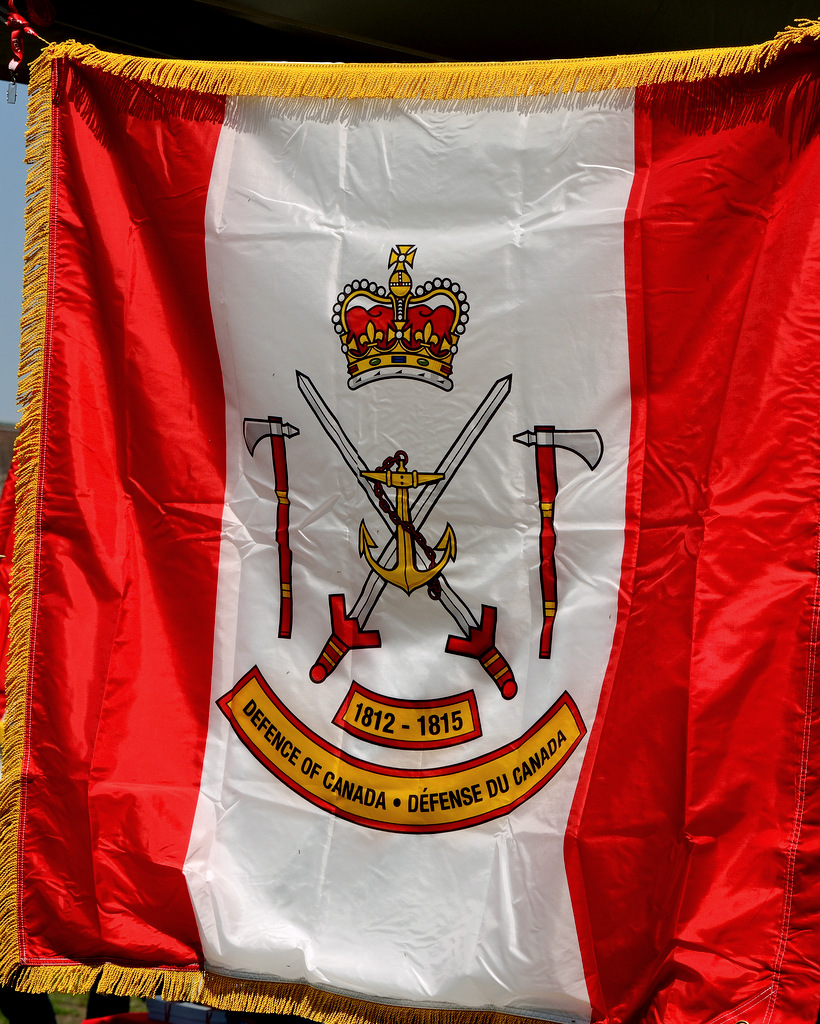 The 7th Toronto Regiment, RCA along with all artillery formations in Canada are not awarded Battle Honours.

The motto Ubique was granted in the 19th Century as an honorary distinction to ‘take the place of all past and future battle honours and distinctions gained in the field’.  The one exception is Defence of Canada, 1812-1815 which 7th Toronto Regiment, RCA along with 4 other RCA Regiments hold in a lower precedent to our universal battle honour Ubique.  The Defense of Canada, 1812-1815 honour is memorialized on a Commemorative Banner authorised to the Regiment on 20 Oct 2011.

** pictured is an example of the Defense of Canada Commemorative Banner 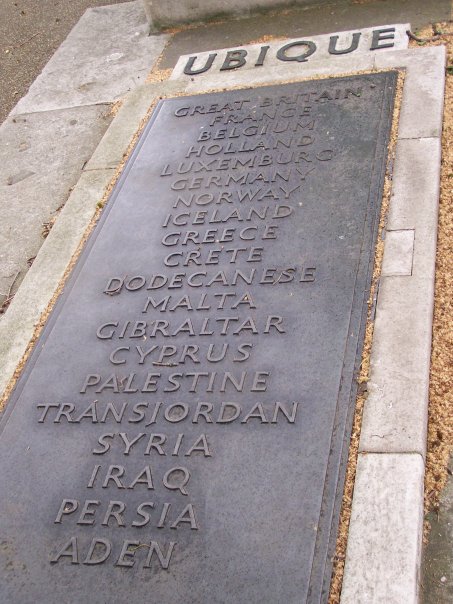 The second being “Ubique”, the Latin for Everywhere, which is not officially a motto but an honorary distinction to replace any Battle Honours the regiment had gained or will gain.

There are other unofficial sayings that have become popular in the Regimental vernacular.

“The Guns, the Guns, thank Gawd the Guns” is a common greeting normally coming from Infantry or Calvary soldiers towards a Gunner – taken from the Rudyard Kipling poem Ubique.

“Once a gunner, always a gunner” a familiar, welcoming phrase that is said to old comrades as well as brand new recruits.  The Regiment is one family and a gunner will always be part of that family, coast to coast across the Commonwealth and across nations.

“It’s a great day to be a gunner” is another, a modern slogan that expects a promising future of gunners and the gunnery trades.

**pictured is a detail from the RA Memorial in London.  They have listed the extensive subordinate honours.

The 7th Toronto Regiment carries two symbols, one consistent with all other RCA Regiments and another common with other artillery, engineer, sapper, fusilier and traditional trades that work with explosives.

The first is our cap badge crest.  The cap badge is the most significant uniform piece that a soldier wears.  It is what links him/her together with the Regiment and is the identifier that the wearer of this cap badge is trained to deliver an immense volume of concentrated firepower.   From the Chief Herald of Canada the official description is “A smooth- bore 9-pounder field gun in gold on a field of green above an azure, gold bordered scroll inscribed “UBIQUE” below the gun an azure gold bordered scroll inscribed “QUO FAS ET GLORIA DUCUNT” the whole surmounted by the Royal Crown proper.”  Most officers and Chief Warrant Officers will wear an embroidered fabric cap badge while Non-Commissioned Officers and Junior Ranks will wear a brass cap badge.  The crown on the cap badge will change depending on the monarch and there will be almost unnoticeable differences with British, Australian and New Zealand Artillery regiments.

The second symbol is the Grenade that is normally worn as a collar badge.  The 7-pointed-flaming grenade on a scroll with Ubique emblazoned has developed into our secondary crest.  It differs slightly amongst Commonwealth nations and is very similar to those worn by other trades that handle explosives.  The legendary genesis of the flaming grenade is a link to Our Patron Saint, St. Barbara. 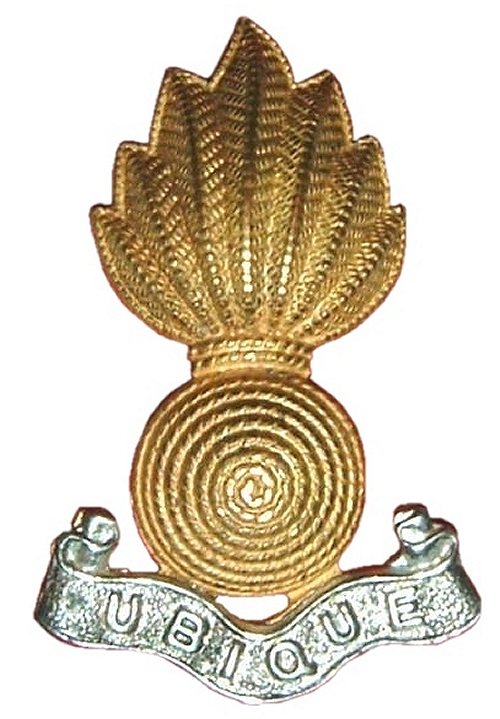 The seven-pointed grenade as a “collar dog”.  Above is the crest of the RCA. 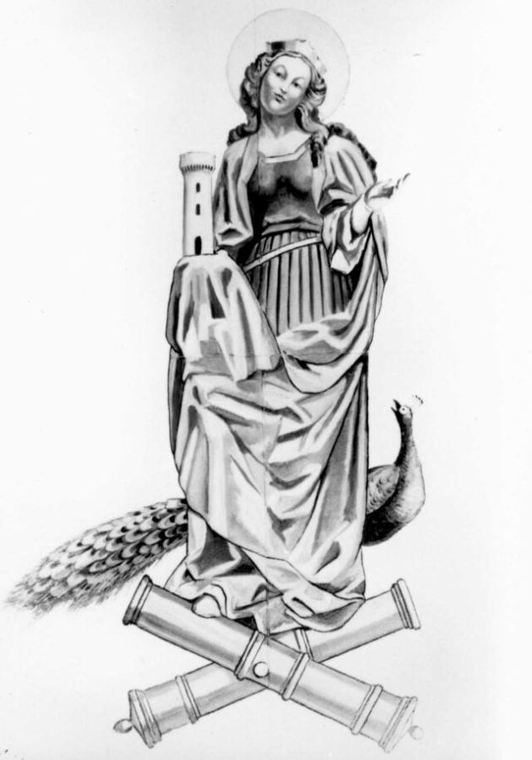 St. Barbara is the Patron Saint of The Royal Regiment of Canadian Artillery.

According to legend, St. Barbara was the extremely beautiful daughter of a wealthy heathen named Dioscorus, who lived near Nicomedia in Asia Minor. Because of her singular beauty and fearful that she be demanded in marriage and taken away from him, he jealously shut her up in a tower to protect her from the outside world.

Shortly before embarking on a journey, he commissioned a sumptuous bathhouse to be built for her in the tower, approving the design before he departed. Barbara had heard of the teachings of Christ, and while her father was gone, she spent much time in contemplation. From the windows of her tower, she looked out upon the surrounding countryside and marvelled at the growing things; the trees, the animals and the people. She decided that all these must be part of God’s master plan, and that the idols of wood and stone worshipped by her parents must be condemned as false.

Gradually she came to accept the Christian faith. As her belief became firm, she directed that the builders redesign the bathhouse her father had planned, adding another window so that the three windows might symbolize the Holy Trinity. She also traced a cross in the marble of the bath. Upon his return, her father was wild with rage that she had disobeyed his instructions regarding the bath house windows, and when he learned their religious significance, he drew his sword to kill her. St. Barbara fell on her knees in prayer and was miraculously transported to a mountain. Here she was found by a shepherd who betrayed her to Dioscorus. She was dragged before Marcian, the prefect of the province, who decreed that she be tortured and put to death by beheading. Dioscorus himself carried out the death sentence. On his way home he was struck by lightning and his body consumed.

Saint Barbara lived and died about the year 300 AD. She was venerated as early as the seventh century. The place of her martyrdom is variously given as Heliopolis, a town in Egypt, and as Nicomedia, Asia Minor. The year varies from 235 AD to 303 AD. The legend of the lightning bolt which struck down her persecutor caused her to be regarded as the patron saint in time of danger from thunderstorms, fires and sudden death.

When gunpowder made its appearance in the Western world, Saint Barbara was invoked for aid against accident resulting from explosions. Since some of the earlier artillery pieces often blew up instead of firing their projectile, Saint Barbara became the patroness of the artillerymen. She is also regarded as the patroness of armourers, gunsmiths and miners.

Saint Barbara is represented in art as standing by a tower with three windows, carrying the palm of a martyr in her hand. Often, she holds a Chalice with the Host or Bible above. Sometimes there are cannons nearby. – from the RCA Standing Orders

**pictured above is St.Barbara with crossed cannons and her tower with three windows. 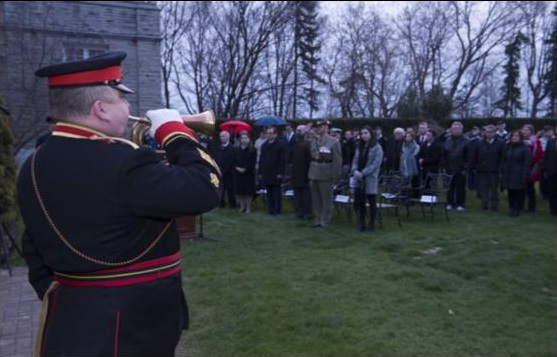 Our Music and Marches

The Band, pipers, buglers, drummers have always been the essence of the Regiment.  The 7th Toronto Regiment, RCA is no different and has unique calls, marches and songs.

Check back as media files will be following soon. 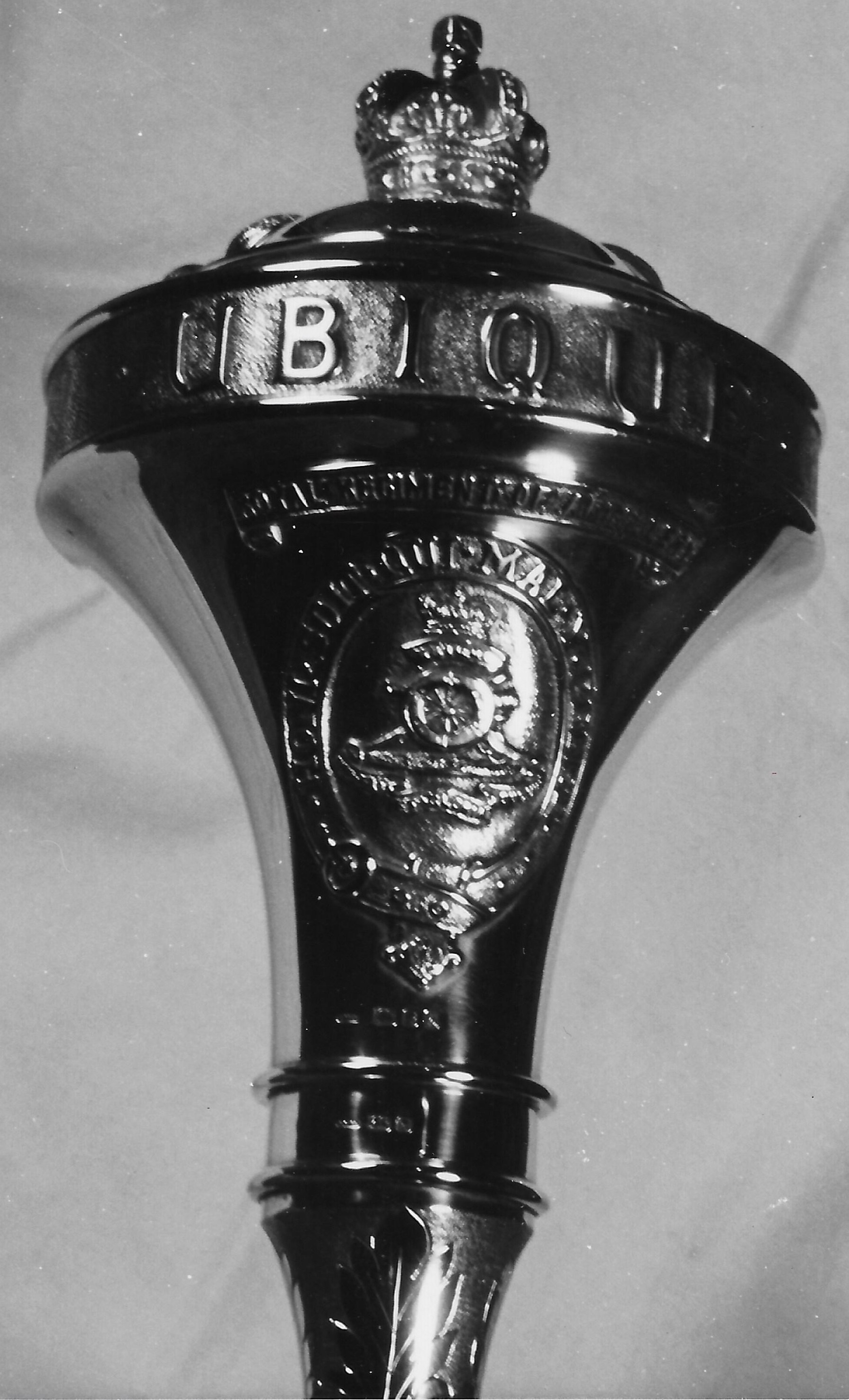 The Regimental mace. Carried by the Band Sergeant Major.

At Ease on Parade

Watching the 7th Toronto Regiment on parade you will notice that a formed body is turned over to another commander “At Ease”.

Gunners in field work extremely hard, loading ammunition and often manhandling the cannons themselves.  When the battle or manoeuvres were over, commanders thought it was prudent to allow the ranks a breather and not have them standing “At Attention” for extended periods allowing them to stand “At Ease” on parade. 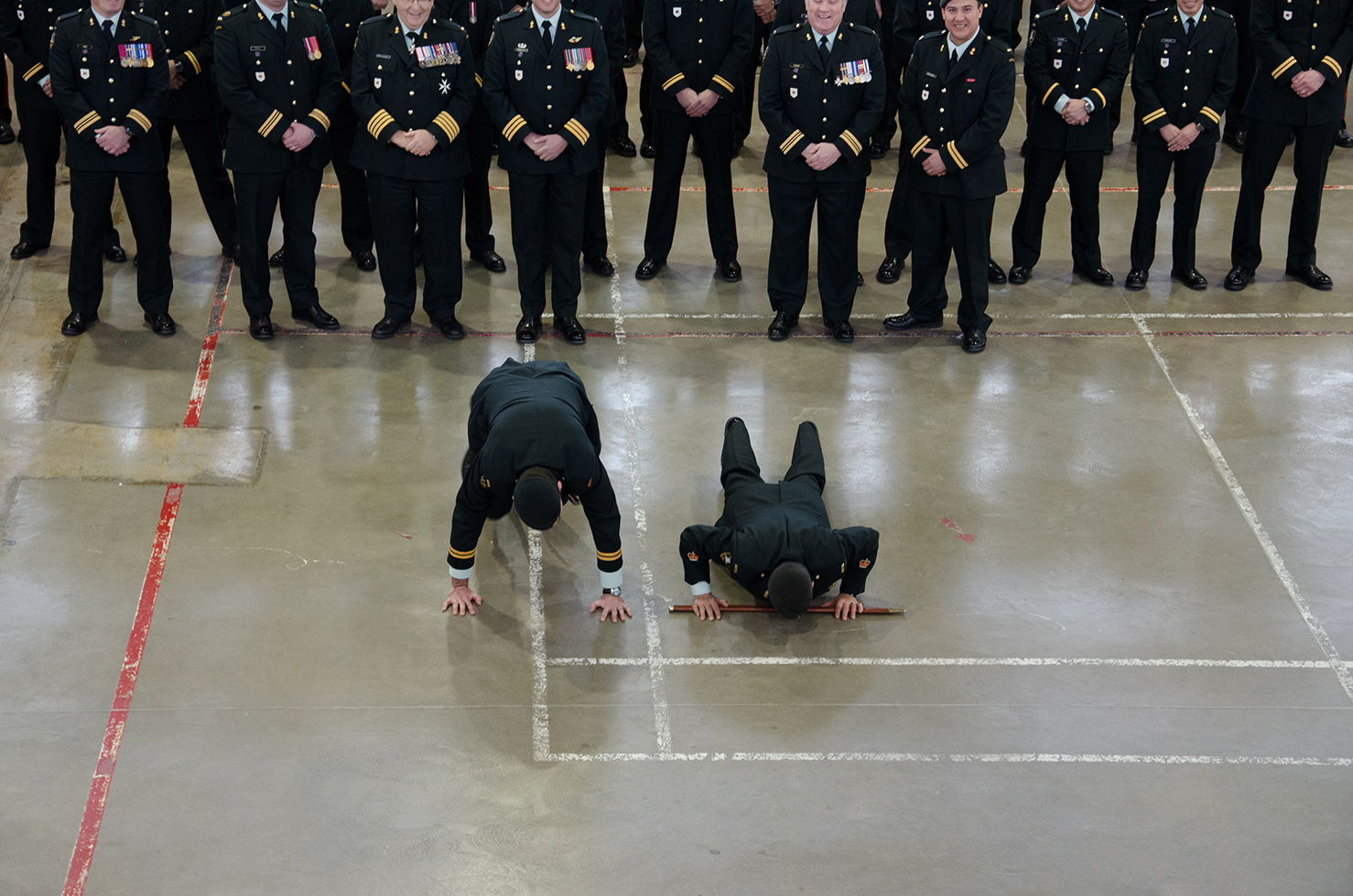 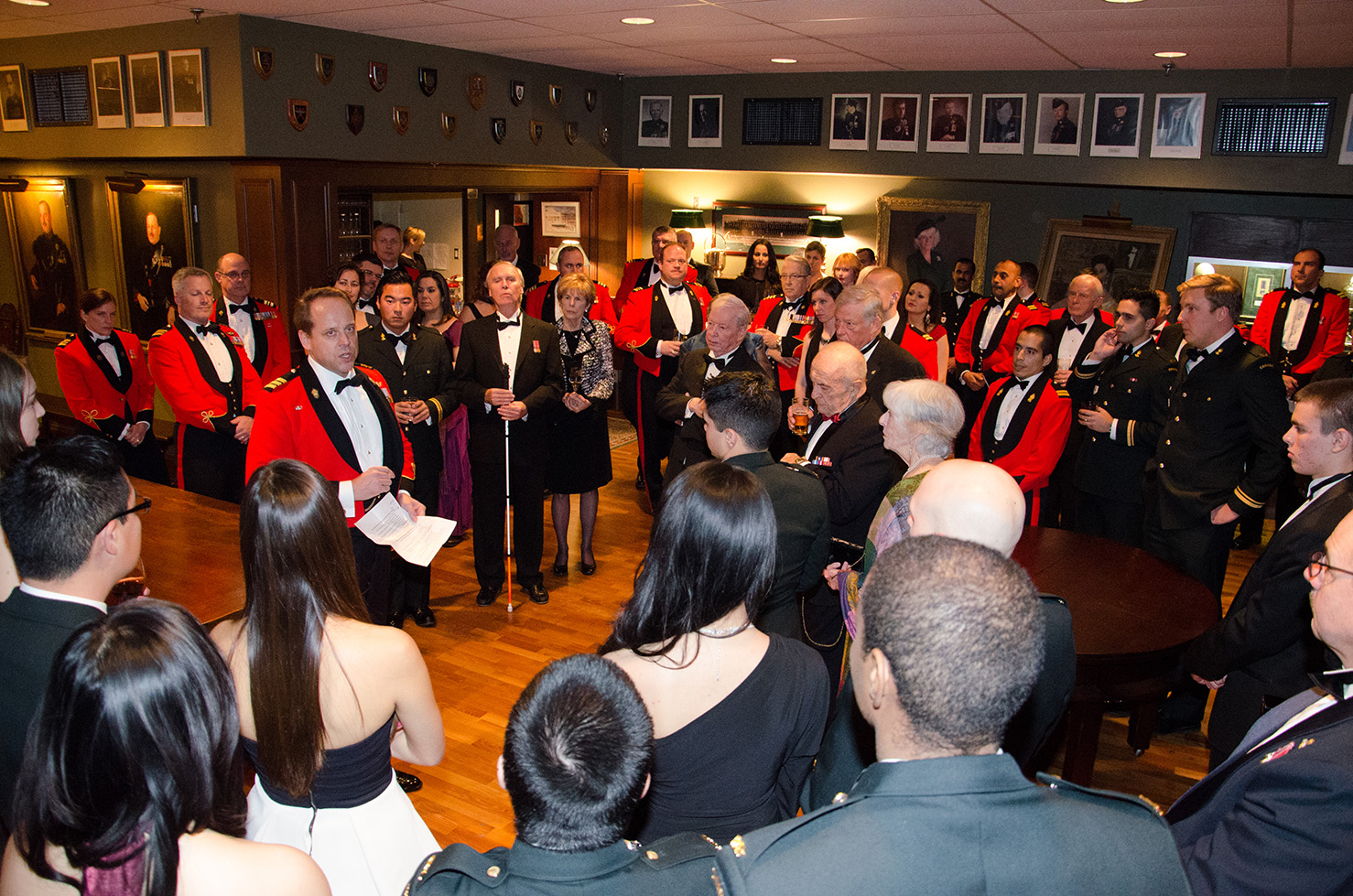 At Ease in the Mess

The Messes of the Regiment are a place for physical relaxation and standing at attention for any reason is discouraged.

When speaking or greeting a higher rank or appointment proper respect and courtesy are maintained but rigid drill movements are left for the drill floor.  You may notice that during dinners when Regimental marches are played, Artillery Soldiers remain seated when their march is played for the same reason as mentioned above. 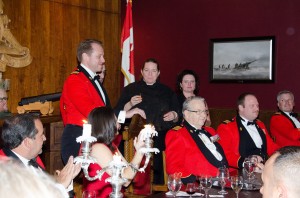 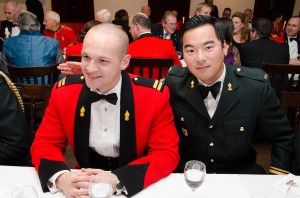 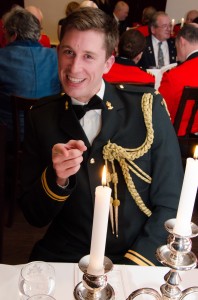 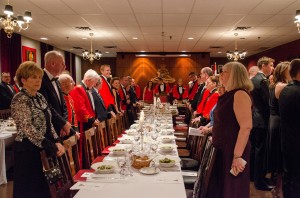 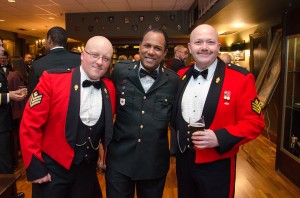 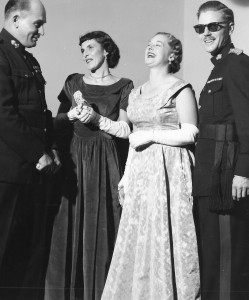 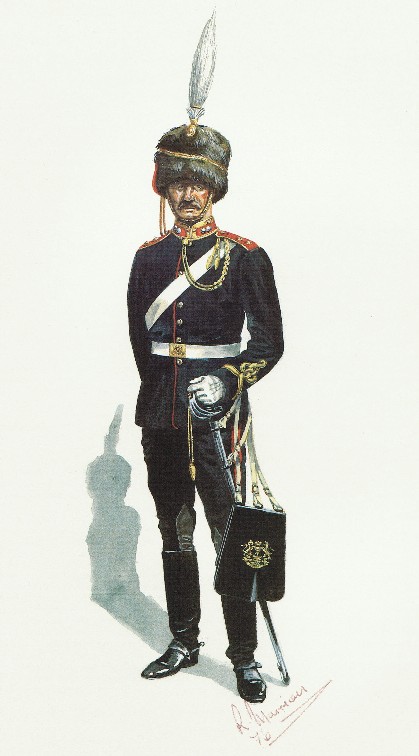 During the Renaissance when Gunnery was in its infancy, artillery pieces were manned by employees of the foundry where the cannon, ammunition or gunpowder was made.

Read More
The foundry employees were outfitted by their employers and didn’t wear Regimental uniforms.  When the Royal Regiment of Artillery and its soldiers began to handle the cannons they did not adopt the usual scarlet red coatee of Regiment’s that carry the “Royal” designation.  Instead, the Artillery adopted a blue coatee with scarlet embellishments.  It was determined that a scarlet coatee would become very dirty very quickly as the gunpowder smoke on old cannons was overwhelming.  The blue coatee hides the dirty work gunners do much better. 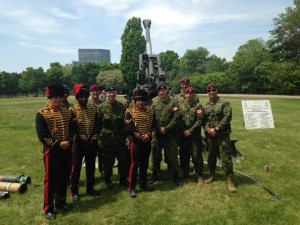 Members of 2RCHA in Full Dress Blues and in modern CADPAT.  Above is a print of an RCA Officer in full dress c.1900.