The 7th Toronto Regiment, RCA is part of the broader Family of the Royal Regiment of Canadian Artillery. Within Toronto, the Regimental Family includes:

The different constituents of the Regimental Family work together to develop and generate capabilities that will sustain the Regiment in operations, assume excellence in leadership, nurture the family institution, connect with Canadians, and celebrate the 7th Toronto Regiment’s rich history and tradition.

Mark Clearihue was appointed Honorary Lieutenant Colonel of 7th Toronto Regiment, RCA, by Ministerial Order in October, 2016. The son of an RCAF WW2 veteran, HLCol Clearihue was born in Owen Sound, ON

The son of an RCAF WW2 veteran, HLCol Clearihue was born in Owen Sound, ON. Raised from an early age in the United States, he graduated from Colgate University in 1974 with a Bachelor’s of Arts (Economics). He excelled as a distance runner, was a high school state champion and won 12 varsity letters in Cross-Country and Track while at Colgate. Returning to Canada in 1975, HLCol Clearihue entered the banking industry and enjoyed a 39 year career with TD Bank Group where he held successive positions in Financial Analysis, Commercial Lending, Branch Management, and Regional Sales Leadership. His final responsibilities centered on leading TD’s Secured Lending sales teams across Canada. He retired from TD in 2014. HLCol Clearihue is a Director of the Juno Beach Centre Association, which oversees the Juno Beach Centre, Canada’s Second World War museum and cultural centre located in Normandy, France. The Centre pays homage to the 45,000 Canadians who lost their lives in defence of Canada during WW2. He is a member of Canada Company, a charitable, non-partisan organization that serves to build bridges between business and community leaders and the Canadian military to help CAF personnel receive welldeserved support, care, and recognition. HLCol Clearihue is a challenged golfer, an occasional jogger, and a novice cyclist. He is a member at Mississaugua Golf & CC and The Classics Golf & CC in Naples, Florida. He and his wife Judy reside in Mississaugua. They have two sons and are looking forward to becoming grandparents in 2017. 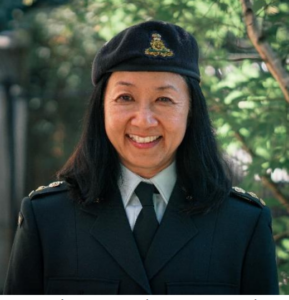 HLCol Jeannette Chau was appointed to this position by Ministerial Order  on 11 May 2020.

Jeannette Chau is a former serving officer of the 7th Toronto Regiment.  She joined when she was 17 years old and worked her way up to the rank of MBdr before becoming one of the first two female officers in the Regiment. Ms. Chau attained the rank of Captain, the highest a female officer could in a combat regiment at the time. After serving over 11 years she retired from the reserves to focus on her engineering career

HLCol Chau holds a Bachelor of Applied Science in Electrical Engineering from the University of Toronto, and a Masters of Business Administration (MBA) in Marketing and Strategic Planning from the Schulich School of Business, York University

HLCol Chau spent twenty years in the telecom industry in progressively senior positions before moving to Professional Engineers Ontario, the licensing and regulatory body for the 89,000 engineers in Ontario.

She is a member of the Limber Gunners, past President of the Mississauga Arts Council, member of various community organizations, and enjoys running and competitive Dragon Boat racing.  She is married with two adult children. Her son is a member of the Toronto Scottish Regiment.