Ubique! Chapter of the IODE

Who are the IODE?

The Ubique! Chapter of the Imperial Order of the Daughters of the Empire (IODE) was bestowed on 8 February 2016 in Toronto.  This makes it newest chapter in Canada and a welcome member of the Regimental Family.  It is also one of only two chapters that has a affiliation with an active Regiment.  The members all have a close attachment to the Regiment, they have either served, have a close family member currently or previously serving or another indelible affiliation with the Regiment or its members.

The IODE began as a federation of women to promote patriotism, loyalty and service to others.  It has since evolved into a well established women’s registered charity.

For information on joining, contributing or just general interest contact the local president Ms Patricia Geoffrey at ubique.iode@gmail.com.   Or refer to the national website at www.iode.ca. 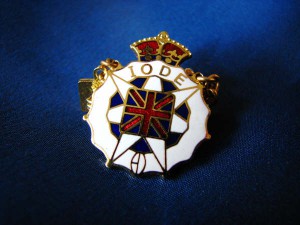