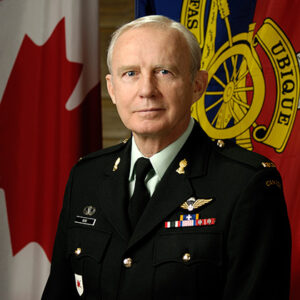 Brigadier-General Ernest (Ernie) Beno OMM, CD, began his military career when he enrolled as a Gunner with the 42nd Medium Regiment, RCA in 1960. Having served two years as a young reservist, BGen Beno transferred to the Regular Force and was posted to the 2nd Regiment of Royal Canadian Horse Artillery (2 RCHA) in Winnipeg, Manitoba.

Other appointments were Directing Staff and Deputy Commandant of the Land Forces Command and Staff College (Kingston), Director General Reserves and Cadets (Ottawa), and Director General Military Personnel (Ottawa). He retired from the Canadian Armed Forces in 1997 at the rank of Brigadier-General.

On 15 September, 2007 BGen Beno assumed the appointment of Colonel Commandant, The Royal Regiment of Canadian Artillery.

In 2014 he became the Honorary Colonel of the 7th Toronto Regiment.  During his appointment he oversaw a renewed communication stream between the active Regiment, the Association, the local community and the Army at large.  He was also instrumental in bringing new initiatives to the Toronto Artillery Foundation of which he was the chairman.  One of his last acts in uniform was accompanying members of the Regiment to France for the 100th Anniversary of the Battle of Vimy Ridge.  He retired from this position on 22 May 2017.

General Beno holds a Bachelor in Business Administration (BBA) from the University of New Brunswick, 1978-80, and a Masters of Public Administration (MPA) from Queen’s University, 1987-90. He has been awarded the Order of Military Merit, and the Canadian Forces Decoration.

General Beno and his wife Mia live in Kingston, Ontario

Going out with a Bang!