LCol (ret’d) George Haylock was born October 1941 in Toronto. He attended Northview Heights Collegiate Institute before studying business administration at what was then the Ryerson Institute of Technology. Following his graduation from Ryerson in 1964, LCol (ret’d) Haylock worked in business before beginning his career with the Ministry of Labour.

As a high school student in 1958, LCol (ret’d) Haylock enrolled in the Canadian Armed Forces through the student militia program. He served first as an NCM in the 42nd Medium Artillery Regiment (RCA), then was transferred to 7th Toronto Regiment (RCA) in 1965. He rose through the ranks as an NCM, reaching the rank of Sergeant, then received the Queen’s commission in 1963. As an Officer, he served both within and outside the unit, taking on Class B opportunities in the 1970s.

LCol (ret’d) Haylock served as CO from 1979 to 1982. As a reservist, he balanced military duties with considerable civilian responsibilities: during his years as CO, he took on a new position in the provincial government and also greeted the birth of his first child—all while commuting from Kitchener.

Nonetheless, LCol (ret’d) Haylock enjoyed his tenure as CO. A memorable highlight took place at the RCAA meeting at St-Jean in 1980. Prior to becoming CO, he served for a second time as BC 9 and, in 1979, he led the Battery to victory in a national Gun Battery competition. Since he took command of the Regiment soon afterward, LCol (ret’d) Haylock was honoured personally to receive—on behalf of the Regiment—the Cape Challenge Cup that 9 Bty had won under his leadership.

Having retired in 2006 from his career as a civil servant, LCol (ret’d) Haylock continues to reside in Kitchener, where he enjoys his well-deserved retirement. In his words, he is “going strong”! He is particularly grateful for opportunities to see his two adult children (who live in Alberta and the United States, respectively).

LCol (ret’d) Haylock reflects that, when he served as CO, he worked to ensure that the unit would continue to flourish for years to come. Thus, in the legacy of 7th Toronto Regiment (RCA), LCol (ret’d) Haylock is yet another valuable link in the chain of leadership that displayed the dedication and foresight needed to carry the unit to the many successes we enjoy today.

LCol George Haylock passed away after a short illness in January 2017. 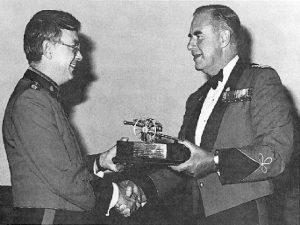